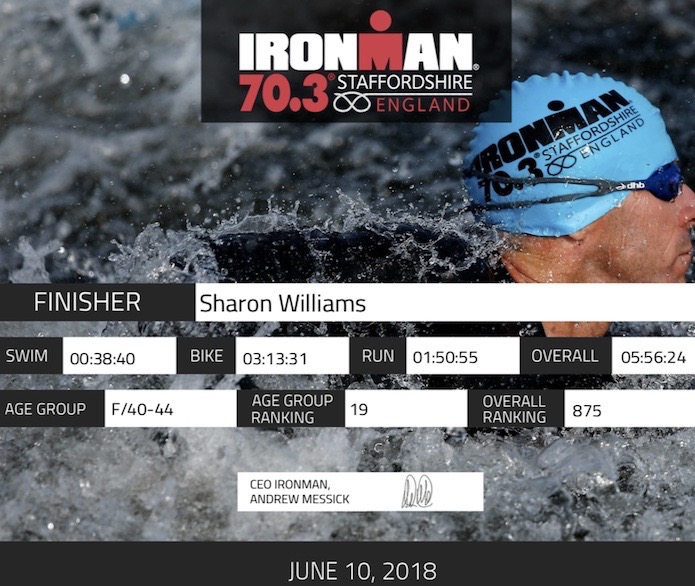 So, my second Ironman 70.3 is done…in fact, that is also only my second triathlon.  I stand by what I have always said; I am not a triathlete. Not a real one.  For a start I have to go to the loo in transition.  I can never find my stuff, I’m hugely awkward and uncoordinated getting on my bike and clipping in; I feel cloddish and ungraceful.  It’s a clumsy and cringeworthy sight to behold.   I also compartmentalise the three disciplines not giving much thought to my overall time.  Transition, although considered the fourth discipline by the real triathletes, was not something I practiced or trained for. It takes as long as it takes and if it takes longer then so be it.

So here we were on unfinished business following last year’s savagely hot attempt.  My husband Huw and my goal was to try to stay together as much as we could.  This was going to be hard on the bike but I was ready to be pushed and Huw knew my limits.  The previous two days registering, bike racking and bag dropping had all gone smoothly; split transition demands a degree of pre-planning and an acceptance of the faff factor. 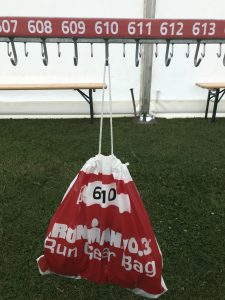 The irony of getting up at 3am on the morning of a long day was not missed.  A beautiful morning dawned though and by 6.30am we began to get swim ready in the sunshine.  But not for long.  A thick, cool fog suddenly descended on the whole of Chasewater; like a smoke screen. The irony of the fog hiding the swim course like the enemy was not missed either.

Swimming is an honest sport. You can’t blag it, you can’t’be something you’re not.  Swimming, especially in open water, highlights fear and anxiety, courage and determination.  For me it requires considerable mental focus.  It’s unnatural and prompts feelings of alarm to be swimming away from safety especially surrounded by unknown flailing arms, legs and torsos.

The fog lifted after an hour and I reminded myself of my swim plan.  Get it done.  And try to avoid the thrashing appendages that seems to congregate in particular, around buoys.  I executed my simple plan the best I could.  I kept my head together, I swam as well as I could and exited the water bursting with relief not that far behind Huw.

I am not a bike monster. My legs are reasonably strong, and I have some stamina but to win at cycling you need to be gutsy and uncompromising and be gifted in bike handling skills.  Sadly, I’m not proficient in any of these areas.

After nerves getting the better of me and finding it hard to clip in at the mount line, I did my very best to push as hard as I could the whole distance.  My legs were protesting from only 35km in but I kept going and I had the most honest bike of my life.  I was out of my comfort zone and riding scared for most of it but particularly at feed stations (back to bike handling skills – taking drinks with my left hand is not easy for me!), sharp bends and I felt intimidated by the speed and the noise of the faster cyclists.

I came into transition in 3h:13 utterly depleted; emotionally and physically.  I had biked like I didn’t have to run.  But guess what?

‘Are you happy to be running at last? ’chirped Huw.  He was a lot bouncier and sparkly than me.  He had enjoyed a great ride well within his limits and he was excited to get this far still together.  He had never been that far in front of me on the bike and on a couple of occasions, even waited for me for which I was so grateful.  At this point on the run though, his energy and zeal was enviable.  And maybe a bit annoying.  As I scowled at him, he was probably wondering why he had bothered.

The fact was, I was not happy to be running at last.  I was very unhappy to be running.  I was very tearful and tired after three scary hours of being on a rollercoaster of fear, pushing boundaries and banishing the negative voices.  Consequently, the first 5k of the half marathon was not a nice place in my head. I was mentally migrating towards the negatives which in hindsight were trying to protect me and keep me safe.  I really didn’t know if, after the hardest bike ever I could run a half marathon with a goal time of 2 hours.  What if I blew up?  What if I overheated (it was hot again!), what if I my fuelling strategy didn’t work?  What if I just gave up? 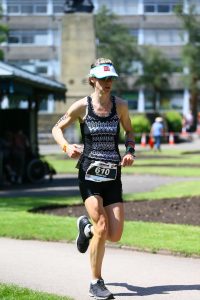 After 5k I got my act together.  I hushed the demons and started to run and get it done.  I repeatedly scanned my body looking for signs of weakness but my breathing was steady, my legs were tired but not screaming too much.  I was OK.

At halfway or so Huw asked if I wanted to know how we were doing.  I knew our pace but even when I’m not on the pain train I can’t calculate what this equates to in time; my brain doesn’t work like that!  I honestly thought he was referring to our run time; like I explained earlier, I see the three disciplines of triathlon as separate with my own times and goals for each one.  I wanted a sub 2-hour half marathon.  I growled that I did not wish to know.  It wouldn’t have helped.  I was doing my very best.  I couldn’t give anymore.

We kept going.  Last lap.  Last 5km.  Just a Parkrun. Last band on my arm. Last feed station.  Into the finish and feeling that exhilaration of approaching the end.  And then Huw announces that we were going to go under 6 hours.  6 hours?  It took a few seconds to register. I genuinely hadn’t considered our overall time and I would never in a million years have thought I was sub 6 hours calibre. My bike just isn’t strong enough…

I’m still not a triathlete but I do know it is an incredibly honest sport.  Like all endurance sports, there is nowhere to hide.  It can be a fairly brutal awakening if you kid yourself you have done the training and you haven’t, or you get your fuelling strategy wrong; all easily done. But as honest and merciless as it is, it can also be forgiving. The nature of triathlon means regardless of your performance on the swim or the bike, you have no choice but to move on, get over it and with a clean slate, do your best for the following discipline and with any luck it might be your strongest. This ethos of second chances is a brilliant opportunity but it can feel hard having no time to process or celebrate any accomplishments.  Your time will come however,  and having unpicked every aspect of our race since Sunday and as hard as I found it, I left a bit of my soul out there on the course and with a finish as honest as the race, what you saw was what you got; an elated, exhausted and emotional runner who had a second chance at IM70.3.