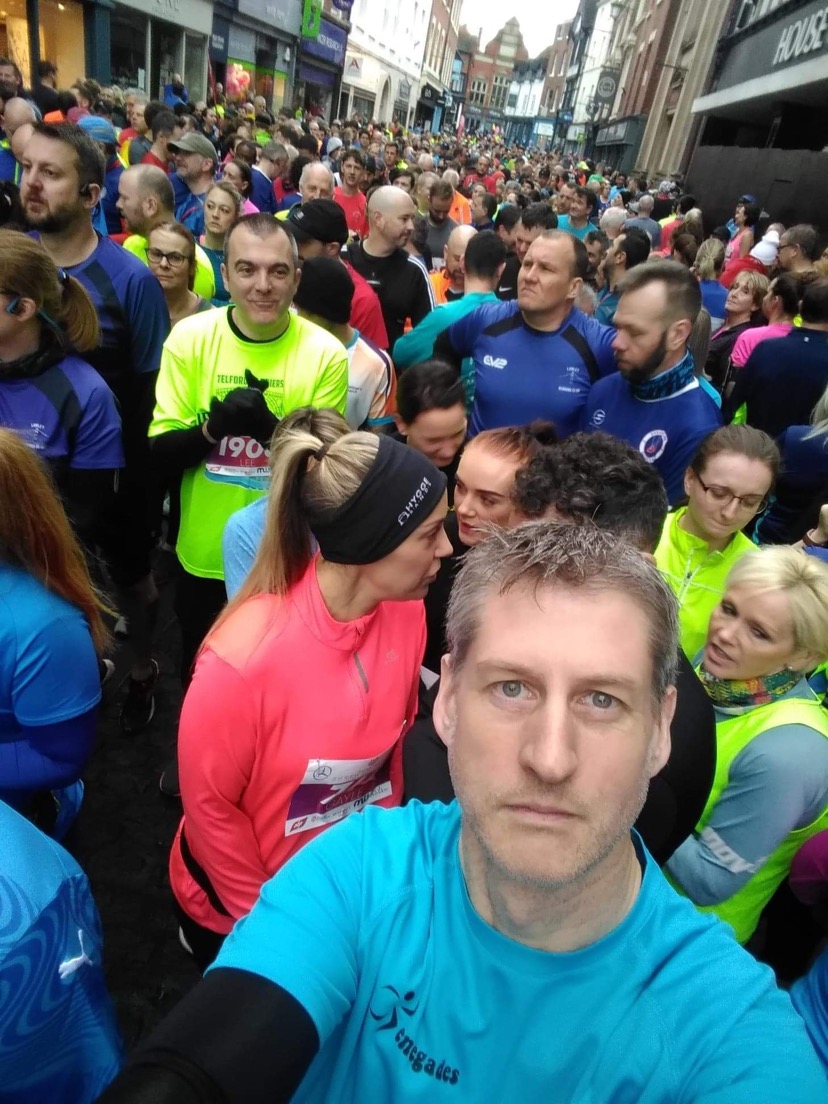 If you ever want to be inspired, quite often you don’t need to look very far. In my work I am privileged to be part of difficult and emotional journeys.  My clients and athletes go to enormous lengths to fit in their training or change their nutrition habits or even dream up amazing goals just to get themselves out of bed in the morning.  It is humbling.

Tom is no exception.  I have been working with Tom since spring 2019.  We already knew one another through parkrun and our local running club.  He was a runner but he came to me first of all, with a weight loss goal.

Tom is bright, articulate and erudite man who loved to run.  He knew where he was going wrong with his food choices but he just needed a gentle nudge and some accountability to set the ball running.  With that accountability that came with having me as his nutrition coach, came the reinforcement of his goals and the belief that he could actually achieve them.  His goal was to lose 19kg in 6-7 months.  Far from an insignificant amount but we wanted to do it gradually and healthily.

Tom completed reworked his attitude to food and alcohol and re-educated himself on what his body actually needed to meet his daily activity levels and lose weight. Anyone who has tried to lose weight will know that this is not a fast or easy process.  There are no shortcuts and it far from glamorous but as the weeks ticked along, Tom’s gradual weight loss complemented his running ambitions perfectly; running ambitions that he had shared with me as I became his running coach too.  Weight loss and running then became inextricably linked but not in the way you might first thing.  Tom wasn’t running to lose weight; he was running because he enjoyed it and positively impacted his mental health but through healthy good choices and an active lifestyle he did indeed lose weight.  And the lighter and stronger Tom became, the easier and more enjoyable his running was for him.  This was fuel for the fire for Tom as he had a head full of times and running goals that he was hungry to chase after.

His weight settled after 7 months; he had lost 15kg so 4kg short of his goal.  Did this matter?  Not even a little bit; he looked and felt amazing and because also, bigger things had happened and were continuing to happen for Tom with his running.

Confidence was something Tom seemed to lack especially with his running.  He didn’t believe he was a runner; not really.  Of course, he has always been a runner; anyone who runs no matter their pace, distance, their body shape or their reasons why, they are runners.  Seeing Tom’s confidence grow was wonderful to see as was watching his self assurance develop; he finally was starting to believe he was a good runner and this was  complete joy to observe.

Pre coronavirus, 5km is one of the easiest distances to test yourself on with most places having access to parkrun however,  it is far from the easiest task to wake up and run until you feel like your lungs will explode.  Or is that just me?  Fortunately, many runners are happy to turn up and run to close to their maximum effort every week. Tom is one of these dedicated and sadistic individuals.  He would always rise to a parkrun PB attempt and one Saturday in October 2019 I came across him on the second lap; he was going for his first sub 25 minute 5k – I couldn’t just desert him.  We ran the last lap together and easily dipped under.  Two months later he was back for more and this time ran an utterly awesome 23:39!

In September 2017 Tom’s half marathon PB was 2:18:47.  Following lots of hard training together with his weight loss, he reached 2:02:27  in September 2019.  Unsatisfied with that time, he achieved a sub 2 hours time of 1:59:24 on the again, very-not-flat-at-all Shrewsbury Half Marathon course the next month. Hugely respectable times and all the credit must go to Tom.  In fact, I should add here that dipping in under 2 hours was still not enough for Tom.  In February 2020, he ran a ‘just because’ half marathon; not an event but still the distance and this time posted a time of 1:54:21 which is testament to his sheer tenacity and determination.

So many amazing times and PBs and then March 2020 happened, and we went into lockdown.  This was a huge blow for so many athletes and clients.  We suddenly had nothing to train for!  Tom sat back for a while and carried on ticking over whilst the situation unfolded.  We trained easy, not wanted to stress our immune system.  We trained more for our mental health and sanity than the finish line of a race.

In the absence of the actual 26.2 miles being run around London in April, London Marathon organisers came up with 2.6 Challenge whereby people were invited to come up with their own fundraising challenges based around the number 2.6 or 26. Tom embarked on 262 days of activity to raise money for Crisis.  I won’t deny that this caused me quite a lot of concern as a coach!  We all know how important recovery is, but Tom was mostly sensibly, and happily short walks and yoga all count towards his daily activity.

Tom had entered Chester marathon which was due to take place in October but was subsequently cancelled and so as part of this challenge, he wanted to train for and run a marathon on that same day as Chester would have taken place after which he would  continue with an activity every day until mid January.  Sadly, Tom picked up a foot injury during the summer which scuppered his October marathon plan; but not to be discouraged, instead he ran a metric marathon; 26.2 km during which I was privileged to share some miles with him. Tom won’t mind me saying, that it was perhaps not his strongest finish but finish he did and with that finish line he took home some more lessons learned on fuelling and pacing.

Tom pushed on with his daily activity and revised his plans.  January 17th 2021 was the last day of his challenge.  On the 262nd day of activity, Tom would run a marathon.

As many of you will vouch there is a lot more to marathons than just being able to run a long way.  Nutrition can either become a powerful weapon in your arsenal or if you get it wrong, can destroy all of your plans.  Tom had experienced some difficulties with fuelling in previous endurance events; he had unfinished business with the marathon distance from an experience at Manchester Marathon in 2019 where he suffered cramp and had to battle his way to the finish.

We wanted to avoid a replay of this at all costs.   I felt confident his training was more than enough to bring his muscles the resilience they needed but nutrition and hydration; the other possible factor in cramping and hitting the wall,  was something we really needed to dial in and get right.  We used long training runs to practice everything.  We did a sweat test to try to gauge his sweat rate and therefore have a better idea of how much fluid and sodium he should be taking on.  We put what we learned into test out on the road. We tweaked and modified and cramping became a thing of the past.  We became meticulous with both the quality and the timing of carbohydrates before and during long runs.  Tom really started to learn and listen to his body; a lesson that will set him up for all distances that he decides to take on in the future.

It was a long journey; training for a marathon requires huge strength of character and resolve and training for one during a pandemic was an impressive display of mettle.

‘Race’ day was Sunday.  Tom ran a marathon.  He had three levels of goals; his dream time of 4:30hrs was the gold standard.  Second to that was his aim to run all of the 26.2 miles.  And finally, if all that failed, he just wanted to finish the thing.

Well I can report, that Tom certainly did finish the marathon.  He fuelled well, he hydrated

enough, he did not get cramp.  He was hitting his race pace.  Tom and I have yet to have our post-race analysis, but I can say having ran the last 10km with him that he was in control, he didn’t lose his form, he didn’t hit the wall.  He did slow down and his legs were tired but come on; 26.2 miles without that buzz of an event or streets llined with spectatrs; anyone would find that a challenge!  Right at the very end I witnessed and was forced to pick up my pace considerably to join him; for this incredible sprint finish at the end; fatigue clearly wasn’t the only reason he did have to walk a little and was 15 mins off his ‘in a perfect world’ time.   I suspect his head got the better of him at some point and so even though he did everything right in his training, his pacing, his nutrition and hydration, his brain decided he was in more pain and than he actually was causing him to slow down.  And when we are tired, it is really difficult to argue with ourselves.

And so, what is next for Tom. Sunday would have undoubtedly made him stronger mentally and physically.  He is far from broken.  Proof of this is Tom was able to walk home after he had finished and also walk without too much discomfort the next day.  What does that tell me?  It tells me that his training was good and his nutrition and hydration was spot on.  It tells me we need to work on some more mental strategies for overcoming the games our mind plays on us during the darker miles.

Tom,  I’m excited to hear what your next goals are. In the meantime, you are due some recovery and some off plan training.  It has been an absolute pleasure sharing this journey with you far.  Stay positive and resolute in your goals.  They are on the horizon.

For those that are inspired by Tom and would like to donate to Crisis, you can do so here: